The USDCAD exchange rate is looking for support ahead of a double employment figure release.

The US and Canadian economies will both see the release of employment numbers for December. 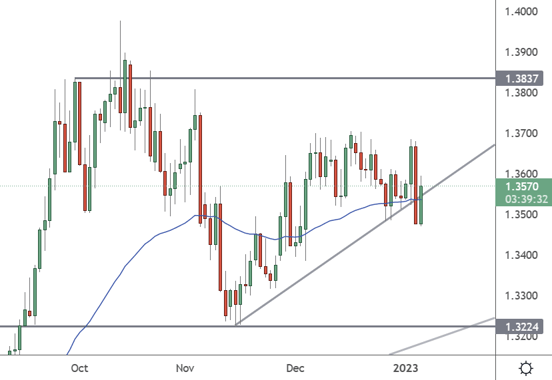 The Canadian economy is expected to see employment at a low improvement of 8,000 jobs, with a rise in the unemployment rate to 5.2%. However, full-time employment is expected to drive the headline due to the scarce labour supply. It is also possible that the country will see a slight rise in wages due to inflation, while hours worked should be boosted.

The US employment release is expected to show a gain of 200,000 jobs in December after last month’s 263,00. The job market activity continues to establish a solid return, helping to relieve recession fears. The unemployment rate is expected to stay steady at 3.7%.

Another release for the US will be the ISM Non-Manufacturing PMI numbers, which are expected to dip to 55 from 56.5. That is still in expansion territory and could boost the dollar after a second month of weaker employment numbers.

On Thursday, the US dollar was boosted by a better-than-expected ADP employment number with a 235,000 print. That hints the Non-Farm payrolls number on Friday could also be better, and the dollar was supported.

Continuing jobless claims for December were also lower, dipping to 1694k from 1718k. Despite aggressive rate hikes this year, the Federal Reserve would be impressed at the economy’s resilience in jobs.

The employment figures tomorrow could see the USDCAD move to test one of the range levels over the coming week or two.