It's Too Early for a European Stock Rally

A rally in global stocks had filtered through to the European stock market. It brought the German 30 index back above support.

Despite solid gains, it is still too early to consider buying European shares. 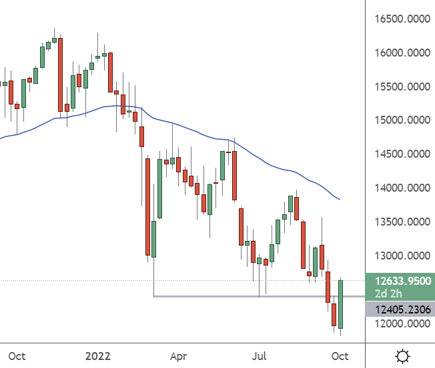 The weekly chart on the GER 30 highlights the critical support level and the damage that has already been done. The 12,500 level has given some respite to the index, but there are still many risks for the region.

The latest talk in the Eurozone is for a proposed cap on gas prices in the region. EU Commission President, Ursula von der Leyen, has opened the door for a targeted and temporary EU-wide cap to cut prices and stop market speculation. But she also noted the risks that the potential cap brings.

"While gas prices have come down in the past weeks, they remain very high and burden people and our economy heavily."

"We need to protect our single market, which has repeatedly provided resilience in the face of crisis," she added.

The proposed cap would have two systems working parallel with a cap on the Title Transfer Facility (TTF), Europe's leading benchmark. This brings suppliers and clients who sign deals for immediate and future gas deliveries. The TTF prices are in euros per megawatt-hour and are the critical index for European gas settlement.

"The Title Transfer Facility is no longer representative of the imported gas," von der Leyen said. That is due to the effects that Russia's supply cuts and market speculation are having.

While the Commission works on a "complementary" pricing system, they would impose a "price limitation" on transactions based on the TTF. A second price cap would be used for electricity generation. In the EU market, electricity prices are set by the most expensive fuel needed to meet power demands. Gas has created pressure on energy firms and consumers this year.

"We should limit this inflationary impact of gas on electricity, everywhere in Europe," von der Leyen said.

Although it is a positive step for the Eurozone, a price cap may cause more problems than it solves. There is still no sign of peace in Ukraine, and the winter still has energy supply risks for businesses.