The price of crude oil has dragged lower in the last month, but there is still a chance of a low being in place. 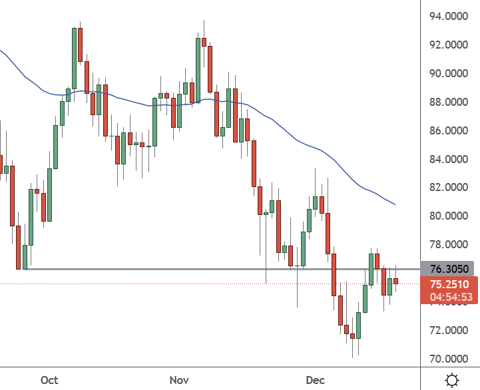 If the price of black gold can rally above the September lows at $76.30, we can see a recovery develop.

The market began changing after Russian exports to the EU cratered by over 50% during the first week of a European embargo.

According to Bloomberg data, to December 16, total volumes from Russia fell by 1.86 million barrels daily, or 54%, to around 1.6 million. The four-week average was also at a new low for 2022. There were also signs of a shortage of shipping companies willing to transport Russian oil from an export facility in Asia.

The Russian oil ban could begin to have a real effect on global supplies, leading to a rally in oil prices.

Any rally in oil is being held back by Chinese demand, and another surge in Covid cases has weighed on crude prices. The Chinese government bowed to unrest and loosened restrictions two weeks ago, but that has reportedly led to a rise in new cases and will hurt the economic outlook once more.

A tightening in oil inventories is expected in tomorrow’s EIA figures. Gasoline stocks are expected to drop from 4.5M barrels to 1.9M. After a significant surplus of 10M barrels last week, crude oil stocks in the US are expected to show a draw of 167k barrels.

However, the US strategic reserve has dropped by 211M barrels this year, which is the least crude oil since January 1984.