The pound sterling is looking for further short-term gains against the Canadian dollar. The British currency has been beaten down as the country lurches towards a recession that could last until the end of 2023, according to the BoE.

Friday brings the latest Canadian employment figures and, after Wednesday’s 0.75% rate hike, a slower employment picture could see the BoC slam the brakes on tightening. 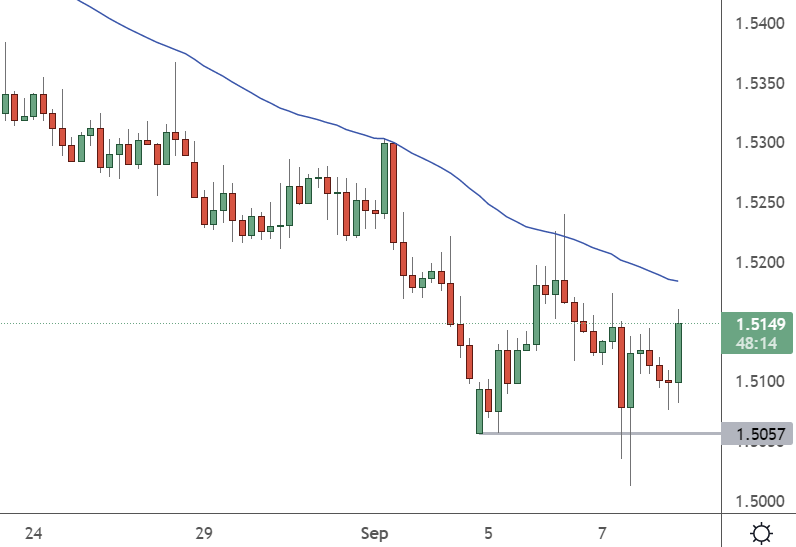 The 4-hour chart of the GBPCAD shows a potential bottom in the air at 1.50. A negative employment number from Canada could spur further gains, but the overall trend is still down. The resistance would be at 1.525-1.530 and a break below 1.50 would open other losses.

Governor Andrew Bailey of the Bank of England said that a recession in the country was "the most likely outcome" and blamed the decline on the war in Ukraine.

Meanwhile, there was hope for some relief from the energy crisis in the UK, with the new Prime Minister ushering in plans for a cap on energy prices for the average household at £2,500. That could give some traders peace of mind to jump back into sterling if they feel that recent selling has been overdone.

The business community is also looking for action from Truss with the British Chamber of Commerce saying:

"She must now take immediate steps to support the economy. Time is running out, and immediate action is required to address the cost crisis.

All the advice being levied at saving the UK seems to hinge on adding further to the country’s debt, which recently crossed the 100% GDP level.

The fifth consecutive from Canada on Wednesday came with growth of just 3.3% in Q2, which the BoC said was then projected. The bank’s governing council said the policy rate would need to rise further as inflation is expected to remain elevated. The bank might cool off with the outsized rate hikes if employment started to deteriorate.

Tomorrow’s Canadian employment data could add to gains in GBP since the growth difference between the two nations is stark and the UK is in a difficult position for pound gains over the longer term.

Tesla's stock price has been decreasing as the markets continue to wobble.  However, the a...

The euro has been surging against the British pound due to the UK’s financial problems.  B...

US Tech Stocks (NAS100) Are Testing the June Lows

The US Nasdaq index of technology stocks is sitting perfectly at the lows from June. After...

Bank of England Restarts QE for Pound to Regain Stability

It was a momentous day for the Pound sterling after the Bank of England announced it would...