EURUSD will be in focus as the US economy gets to see another GDP growth release on Thursday.

The fourth quarter advance figure is expected to come at 2.6%, down from 3.2%. 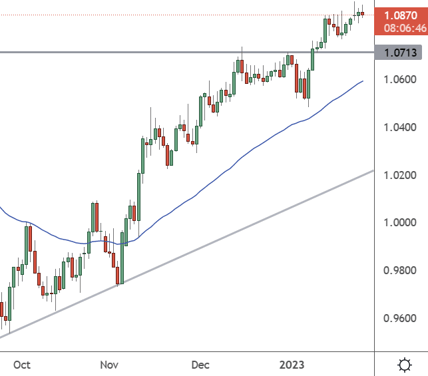 EURUSD is stuck at the top of the recent rally, and traders need clarification about the following path for the pair.

The US dollar made a small gain as fears mounted over an escalation of the conflict in Ukraine. European leaders are increasing their supply of weapons to the country.

President Volodymyr Zelensky welcomed a decision by Germany to supply Leopard 2 battle tanks and remarked that he was “sincerely grateful” to Chancellor Olaf Scholz. Zelensky’s foreign minister, Dmytro Kuleba, called on allies to join the “tank coalition” and send “as many of them as possible” to support Ukraine.

Spain said it was “willing… to work with our allies to do whatever is necessary including the sending of Leopards”.

Russia hit back at the move and said it was “extremely dangerous.” The Russian embassy in Germany accused Berlin of abandoning its “historical responsibility” and of taking the conflict in Ukraine “to a new level of confrontation.”

Meanwhile, a key barometer of health for the US economy continues to flash a recession warning. Many business leaders also agree that the US economy is looking worse. The Conference Board’s Leading Economic Index declined for the 10th consecutive month, with a 1% drop in December to 110.5. Economists were anticipating a decline of 0.7%, according to Refinitiv.

“There was widespread weakness among leading indicators in December, indicating deteriorating conditions for labour markets, manufacturing, housing construction, and financial markets in the months ahead,” the board said.