EURGBP had the potential to confirm a recent bottom, as we noted earlier this week.

A 50 bps interest rate hike from the European Central Bank and a hawkish outlook were enough to spark gains in the pair. 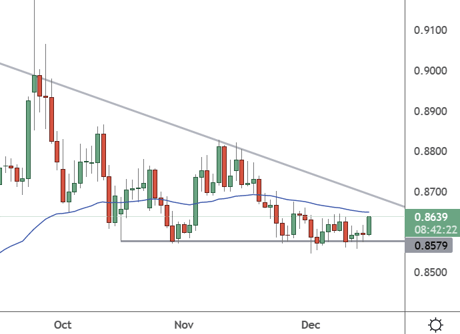 The euro versus the British pound can rally towards the 0.87 level, where a descending trendline resistance awaits.

Expectations for a 50 bps hike were priced in. Still, the timing of the start of quantitative tightening is what most traders were looking for, with expectations for a 'grey' 'first quarter of 2023' range being expected.

The 50 bps hike followed similar moves by the Federal Reserve, SNB, and BoE decisions in the last 24 hours. The guidance that interest rates "will still have to rise significantly at a steady pace" was a hawkish tone for traders.

Additionally, the ECB said it will continue to be flexible in its PEPP reinvestment. They also added that QT will begin in March at a "measured, predictable pace," with the average monthly decline in bonds will amount to 15 billion euros until the end of the second quarter.

The Bank of England also hiked interest rates by 50 bps this week, but there were more policy comments from the ECB. The ECB also raised its inflation forecasts and said it would remain above target into 2025.

The Bank of England hiked interest rates to 3.5% in the ninth-consecutive increase. Markets had expected the move after the Bank's governor and Chief Economist said "more needed to be done" to get inflation under control.

The BoE's accompanying report said several indicators pointed to a weakening economy since summer. It expects a 0.1% contraction in GDP for the last quarter of 2022, which would officially mark a recession in the UK economy after a 0.2% contraction in the third quarter. The economic downturn is expected to last into 2023.

Friday brings a final reading of core inflation for the eurozone, with the number likely to be close to the 5% initial forecast. The euro should continue to see a boost from the ECB comments into next week.