The price of crude oil got a lift from the latest OPEC+ meeting, where a production cut was announced.

Oil prices had fallen last week to lows below the $80 level and have since rallied to $83. 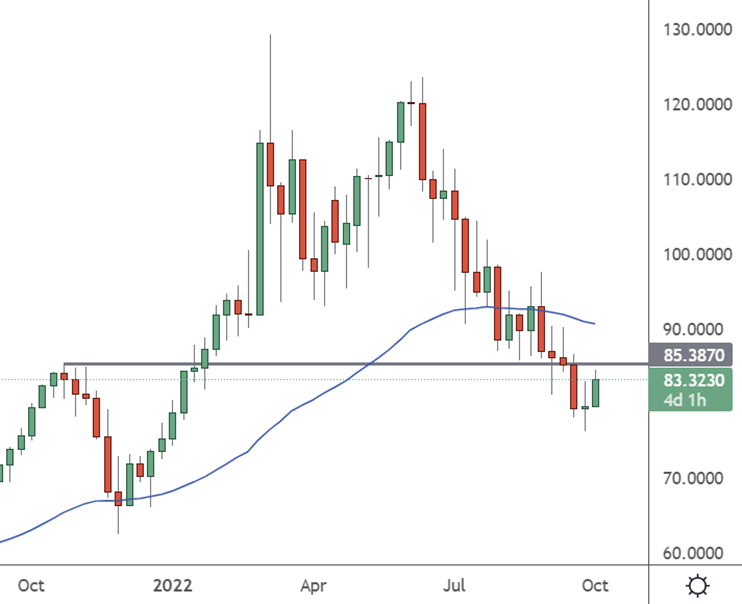 “Renewed interest in oil was ignited on press reports over the weekend speculating on the potential for a significant production cut of 1 million barrels a day or more when OPEC+ meets on Wednesday to shore up the market in a time of falling demand due to the sputtering global economy,” said Colin Cieszynski, market strategist at SIA Wealth Management.

Brent crude prices soared to $130 a barrel in the wake of Russia’s invasion of Ukraine, but the soaring dollar has taken the wind out of crude’s sail.

Meanwhile, Goldman Sachs believes that the US has surrendered its oil sovereignty to the Middle East. In an interview with CNBC, Jeff Currie, who is Goldman’s global head of commodities, said OPEC now has an incentive to trim output because it is the only oil producer in the world with space capacity,

“I like to argue that the old oil order is back,” he said. “OPEC is probably more powerful than it’s ever been in its 60-year history since its inception. One of the reasons is that we have not been investing in alternative energy sources. So, they’re really the only game in town.”

Analysts have pointed to Saudi Arabia and the UAE, in particular, as OPEC members with excess production capacity.

Crude oil trading saw its lowest levels after the January global central bank hiking spree. Last Wednesday, the EIA reported a crude oil inventory draw of 200,000 barrels for the week to September 23. The week before had seen a 1.1-million-barrel build on inventories. The surprise draws on Wednesday came after the American Petroleum Institute (API) had forecast a 4.15-million-barrel stock increase for the week.

Last week in the Dallas Fed poll, oil and gas executives cooled their year-end oil price expectations. In the latest survey, they were reduced from an average of $107.93 last quarter to $88.74 per barrel. The most pessimistic executives saw prices at $65 per barrel, while the bulls have reduced their high-end price from $160 per barrel to $120 per barrel.