USOIL is still heavy this week as a stronger US dollar and demand fears weigh.

The dollar was boosted by more substantial ADP employment numbers, which will bode well for Friday's Non-Farm payrolls. 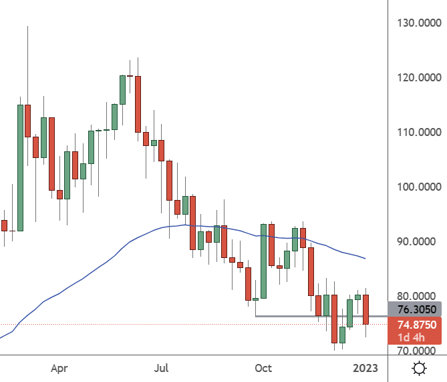 Oil slipped below the $75 level with a price of $74.87 and still lacks buying support.

The price of crude oil has remained volatile due to uncertainty over the plans in Russia. However, some analysts do expect crude oil prices to rebound in 2023. A bounce in crude prices began in February after the conflict in Ukraine but has since slumped on China's lockdowns. China has started to reopen its economy, which could boost prices, but OPEC is another uncertainty with production cuts.

USOIL is expected to "bounce between $75 and $80 per barrel" during the first quarter. This is primarily attributed to global supplies under pressure from OPEC cutbacks and a western embargo on Russian oil, said Bernard Weinstein of the Maguire Energy Institute.

The energy sector is expected to produce "more gains as many commodities remain structurally undersupplied and with the bull super cycle still young," he wrote in a research report this week.

Price advances may be "back-end loaded in 2023 as we anticipate a recession in the first half" of the year, LaForge said. "Within commodity sectors we like energy the best and suspect that oil prices are on track for another positive year, driven by production challenges and strategic opportunities in large oil-producing countries," he added.

A survey of US oil and gas executives taken by the Dallas Federal Reserve expected crude prices to rise to $84 a barrel. The weight on oil has paused amidst the US dollar sell-off with threats of a global recession in mid-year.

The market has remained bearish on oil prices, but there still seems to be no end in sight for the conflict in Ukraine, and we cannot rule out another escalation. Therefore, investors should look upwards from this price pullback after the recent sell-off over the last six months.