The last few weeks have been tough for the cryptocurrency industry with a soaring US dollar and the Federal Reserve interest rate hikes.

The jump in Bitcoin prices over the weekend gave bulls some hope, but a collapse into the $18,700 level halted that. With stocks higher on the day, the price of BTC could create a low here if it can close strongly above the $20,000 level. 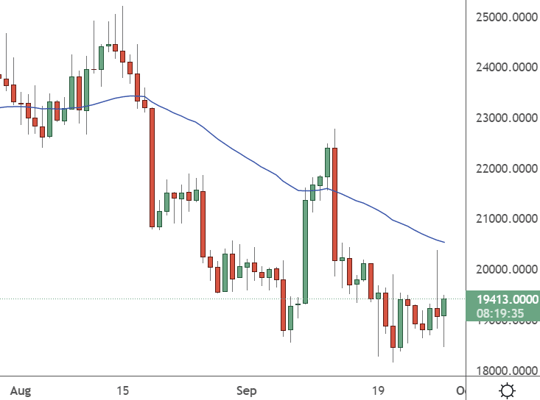 The fall in risk assets is being created by the Bank of England, which just announced that they are restarting their quantitative easing programme due to market panic. On a momentous day for markets, the BoE is capitulating on its previous monetary tightening stance. The central bank had been moving higher with interest rates to beat inflation and has now had to back off because of disruptions in the bond market.

The latest announcement raised hopes that other central banks, including the US Federal Reserve, were also getting closer to an inflection point for a pivot on their monetary tightening policies. However, US Treasury Secretary Janet Yellen did not seem concerned on Tuesday night with a statement that markets were functioning well.

It was also reported that the European Union will tighten restrictions on Russians’ crypto investments within the bloc as a response to the independence votes being held in Russian-occupied regions of Ukraine. A previous limit of 10,000 euros ($9,600) will be scrapped, a person briefed on the sanctions package said, which means Russians won’t be able to hold any assets in EU crypto wallets.