AUDUSD is Looking to Breakout or Breakdown

The AUDUSD exchange rate is trading at a key level with the 0.6530 resistance setting up a potential breakout or breakdown in the price.

US inflation data is the headline figure on Thursday and traders can look for the numbers to force the next move. 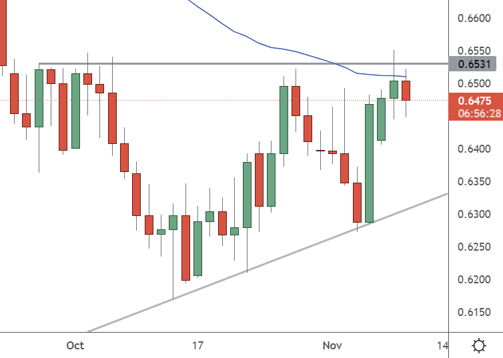 There was bad news for the Australian economy this week, with consumer confidence numbers plunging to a two-year low. The Westpac survey showed on Tuesday that rising inflation, higher interest rates, and sluggish wage growth had weighed on spending power in the country.

The Westpac Melbourne Institute Consumer Sentiment Index fell by 6.9% this month, which is much larger than last month’s 0.9% drop. The reading was the worst drop in over two years, and also saw the index slump to a historical low of 78.

The latest reading comes after data showed that Australian inflation surged to a 32-year high in the quarter to September. The central bank hiked interest rates by 25 basis points in November, but a smaller increase did not support consumer sentiment.

The labour market has remained strong in Australia, but Tuesday’s survey showed that consumers were becoming less confident about the jobs market outlook.

Consumer spending had been a key driver of Australia's economic growth this year and was a support for the Australian dollar. The signs are now pointing to a slowdown that can boost the US dollar.

The US economy will provide near-term clarity for the AUDUSD with the release of inflation data. The market is expecting a drop to 8% from 8.2% in the price index and that could soften the dollar. Traders will have to watch the pair closely to see if this resistance level can be taken out.