Hong Kong stocks are treading familiar territory near the 18,800 level.

Weakness in global stocks and the ongoing economic slowdown in China are hurting the prospects for the HK50, but investors should watch this level. 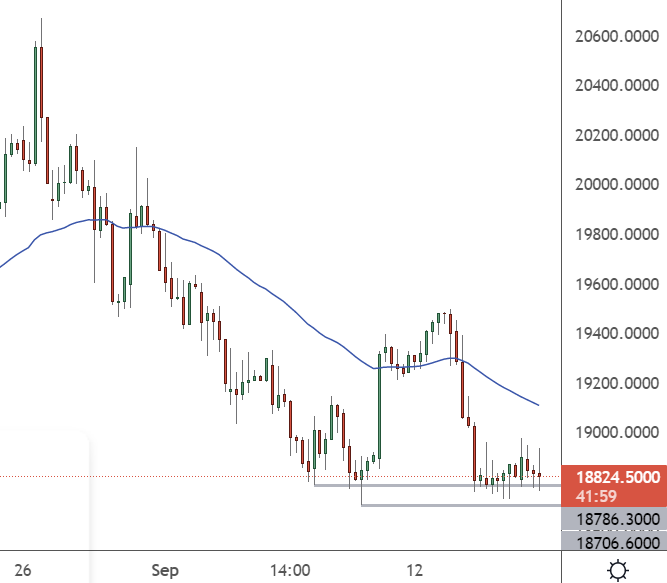 The Hong Kong stock index registered lows in September around the 18,700 level, and that could provide upside potential if we get a buy signal. The price has been hovering with support and limited volume, but if there was an economic catalyst, then it could be the spark that starts a rally.

The market has not been immune to the US inflation report, which also dented Asian stocks as investors expect another 75-basis point rate hike from the US Federal Reserve. Markets are concerned that monetary policy is tightening too hard as inflation fears take priority over slowing growth.

On Thursday, China's central bank partially rolled over its maturing medium-term policy loans, which markets were expecting. Investors do not expect China to stray too far from the US tightening cycle.

The pause in monetary easing was also a response to downside pressure on the Yuan after the People's Bank of China (PBOC) took markets by surprise with lower rates. That led to investors dumping the currency on divergence plays.

The expectation in a recent Bloomberg survey was for Chinese economic growth to be 3.5% this year. That would be the second-weakest return in 40 years, but Morgan Stanley and Barclays are among analysts who see the potential for a lower figure.

That will keep pressure on the Hong Kong 50, but there is still potential for a bottom if these outlooks are priced into the market.

Hong Kong’s stock index faces a crucial week or two after the price was dragged through a ...

Bank of Japan Intervenes in the Japanese Yen (¥)

The Bank of Japan sent out some threatening comments last week that signalled a potential ...

If the Bank of Japan has marked the start of currency wars, then the EURCHF is worth watch...

Following the announcement of interest rate decisions by the Federal Reserve and the Bank ...